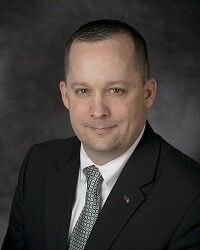 Eric Plummer, Ph.D. is the Chief of Police for Radford University providing leadership for the Office of Emergency Management and the University Police Department (UPD). He also serves as a national critical incident management instructor for the National Emergency Response and Recovery Training Center (NERRTC) through Texas A&M University-TEEX and as an adjunct professor for the Master of Public Safety program at the University of Virginia.

Dr. Plummer came to Radford from the University of North Dakota where he served as the Associate Vice President for Public Safety and Chief of Police providing leadership for the emergency management, safety, risk management and insurance, as well as the University Police Department (UPD). At UND, Dr. Plummer created the Behavioral Intervention Team, established the Continuity of Operations Planning Program, and founded the Enterprise Risk Management Program and Committee which provided yearly risk assessments to the executive cabinet. Dr. Plummer also was the emergency management coordinator for the university’s response to COVID-19 and served as a co-chair of the large research institution section of the North Dakota University System response to the pandemic. He has also served as a Chief of Police for Southern Arkansas University, as well as with the Florida Highway Patrol in numerous roles including state trooper, homicide detective, criminal and internal affairs investigator, and supervisor.

In his time in Florida, he served as an incident commander for tornado disaster areas, as well as an agency representative in the Emergency Operations Center during numerous hurricane disasters. Dr. Plummer has served on numerous local and federal task forces and is currently the chair of the IACLEA Domestic Preparedness Committee and a member of the IACP Aviation Committee.

Dr. Plummer served as a combat signaler in the U.S. Army Reserve from 1993 to 1999, and as an intelligence analyst from 2004 to 2006. Plummer holds law enforcement certifications in Virginia, North Dakota, Florida, and Arkansas, as well as earning the designation of senior chief of police within the state of Arkansas and the designation of Professional Emergency Manager (PEM) in Virginia.

Dr. Plummer holds a Ph.D. in Public Safety with a concentration in Emergency Management, a master’s degree in management, as well as a bachelor’s degree in sociology. He is a graduate of Harvard University’s Executive Education Course in Crisis Leadership and the Southern Police Institute’s 50th Command Officer Development Course through the University of Louisville.