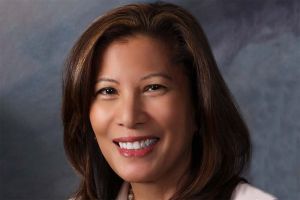 Chief Justice Tani Gorre Cantil-Sakauye is the 28th Chief Justice of the State of California. She was sworn into office on January 3, 2011, and is the first Asian-Filipina American and the second woman to serve as the state’s chief justice.

Chief Justice Cantil-Sakauye was nominated to office in July 2010, unanimously confirmed by the Commission on Judicial Appointments in August 2010, and overwhelmingly approved by voters in the November 2010 general election. At the time she was nominated as Chief Justice, she had served more than 20 years on California trial and appellate courts, including 6 years on the Court of Appeal, Third Appellate District, in Sacramento.

Former Governor Arnold Schwarzenegger nominated her as Chief Justice on July 22, 2010, and the California State Bar Judicial Nominees Evaluation Commission rated her as exceptionally well qualified for the position. At a public hearing on August 25, 2010, she was unanimously confirmed by the Commission on Judicial Appointments, and in a general election on November 2, 2010, an overwhelming majority of voters elected her to that position. As Chief Justice she also chairs the Judicial Council of California, the administrative policymaking body of state courts, and the Commission on Judicial Appointments.

Before her elevation to the Supreme Court, Chief Justice Cantil-Sakauye served for more than 20 years on California appellate and trial courts. In 1990, Governor George Deukmejian appointed her to the Sacramento Municipal Court and in 1997; Governor Pete Wilson elevated her to the Superior Court of Sacramento County, where she presided over both criminal and civil cases. In 1997, she established and presided over the first court in Sacramento dedicated solely to domestic violence issues. In addition, then-Judge Cantil-Sakauye chaired the court’s criminal law committee and was a member of the presiding judge’s task force on domestic violence and the Home Court committee. In 2005, Governor Schwarzenegger nominated her to the Court of Appeal, Third Appellate District.

The Chief Justice was a Special Master, selected by the Supreme Court of California to hear disciplinary proceedings before the Commission on Judicial Performance. She was president of the Anthony M. Kennedy American Inn of Court, an organization dedicated to promoting civility, ethics, and professionalism in the practice of law. And was a member of the national Conference of Chief Justices Board of Directors.

A Sacramento native, Chief Justice Cantil-Sakauye attended C. K. McClatchy High School and Sacramento City College, before graduating with honors from the University of California, Davis. After taking a year off to visit her ancestral homeland, the Philippines, the Chief Justice began law school, receiving her JD from the UC Davis, Martin Luther King, Jr., School of Law. She worked as a deputy district attorney for the Sacramento County District Attorney’s Office, and then served on the senior staff of Governor Deukmejian, first as deputy legal affairs secretary and later as a deputy legislative secretary.

Chief Justice Cantil-Sakauye is a former board member of several nonprofit organizations and has been active in numerous professional community organizations, including membership in the California Judges Association, the National Asian Pacific American Bar Association, and the Sacramento Asian Bar Association, and received the Filipina of the Year Award. She is currently a member of the Board of Directors for the Conference of Chief Justices, The American Law Institute, the Board of Visitors for UC Davis, an Advisory Board member of the Sacramento Federal Judicial Library and Learning Center Foundation, an honorary member of the Foundation for Democracy and Justice, a private nonprofit organization devoted to civics education. She is married to Mark Sakauye, a retired police lieutenant. They have two daughters.