At orientation, everyone was kind and supportive, and they make you feel welcomed as a UVA student. You get all the services you would expect from a university like this. It is amazing.

There is no single route to enrollment in the Bachelor of Interdisciplinary Studies program. Every student has his or her own story, but Jesús Pino Aguilar’s is exceptional in that it encompasses not just a change of careers, but also a change of continents.

Born in Córdoba, a small historic city in the south of Spain, Pino managed a bar and art gallery to pay for his undergraduate studies in law. He soon found himself being drawn to the city’s cultural life and, as a result, questioning his career goals. “I asked myself why I was pursuing a law degree when I really enjoyed working with artists and being an artist,” he says.

With two friends, he founded a bimonthly magazine dedicated to the arts in Córdoba that reported on openings and exhibitions, profiled artists, and listed upcoming events. “We had no money when we started the magazine, so we had to do everything ourselves,” he recalls. “This included photography. Since I was interested, I bought my first camera and started shooting.”

The magazine was a resounding success, attracting advertisers as its circulation grew. Pino might still be at it if he hadn’t met and married Erica Roth, an American living in Spain. Soon after they married, Roth was accepted in the master’s program at Teachers College Columbia University. Pino tried to continue working on the magazine from New York City, but the distance made it very difficult.

Pino arrived in New York knowing little English and without a job. Buying his first MetroCard so he could navigate the city was a momentous event for him. “Even though I was still excited to be there, that tiny piece of paper made me realize how challenging things were going to be. It took me fifteen minutes to decipher the English on the screen, and it cost a significant chunk of the money that I had brought with me from Spain, but my new MetroCard put my feet on the ground and gave me the strength I needed to find a job in my new country.” Pino secured work first as a security guard and then as a language teacher and photographer at the Queen Sofia Spanish Institute, but he soon realized that to succeed in photography and advertising he needed an undergraduate degree.

When Roth took a post with a Charlottesville school, Pino started taking classes at Piedmont Virginia Community College and, having graduated summa cum laude, enrolled in the BIS program. At the same time, he is developing his photography business, doing photo shoots for clients as diverse as the UVA Law School, Monticello, and a local chain of coffee shops. “BIS has been great so far,” he says. “At orientation, everyone was kind and supportive, and they make you feel welcomed as a UVA student. You get all the services you would expect from a university like this. It is amazing.” Not All Online Degree Completion Programs Are the Same. Here's Why.
Image What Is a Bachelor of Interdisciplinary Studies?
Image 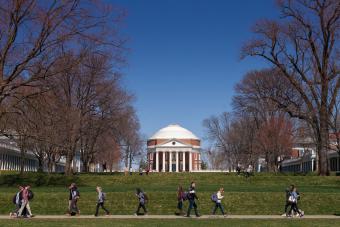